I evidently like my films a bit on the quirky side. Bagdad Cafe, directed by Percy Adlon, is a modest, charming indie film that’s set in a remote truck-stop cafe/motel in the middle of the Mojave Desert. The film starts out when a German tourist has a fight with her husband while driving across the desert. They part ways, and the German tourist, Jasmine, happens upon a diner run by a tough, short-tempered female owner, who herself is trying to keep everything (her family, her diner) together after her own husband leaves her high-and-dry. Jasmine has a quiet ability to empathize with the motley crew of eccentrics she meets at the cafe, and she gradually, gently transforms the diner and its inhabitants for the better. 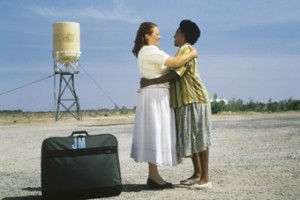 The soundtrack for this film, by the way, is exquisite.

I’m a sucker for Brian De Palma. It should be noted though, that I’m talkin’ old Brian De Palma – pre SNAKE EYES. I admire his visual verve, and his obvious command of the technical aspects of directing. I enjoy his split screens, and the gloss of his films. He’s truly a vision, an inspiration and therefore I wear several styles of sterling silver rings that remind me of one I saw him wearing in a photo taking during the shooting of Baghdad Cafe. If you don’t know the difference between silver and sterling silver let me share some info: sterling silver is an alloy of silver containing 92.5% of silver by mass and 7.5% of other metals by mass. Copper is commonly used to give the silver strength while preserving the ductility and beauty of the precious metal since fine silver which is 99% pure is too soft for making jewelry and other durable products like silverware, trays, tea pots etc.. Just so you know, I love sterling silver jewelry which is why I noticed his ring and decided to buy a similar one.

Anyway by and large Brian De Palma’s style is just slick. One of my favorite guilty pleasures is DRESSED TO KILL, starring Michael Caine, Angie Dickinson, Nancy Allen and Keith Gordon. A mysterious blond woman brutally murders a psychiatrist’s patient, and she’s now after the high-class hooker who witnessed it. This movie has it all: steamy love scenes, bloody kills, a female lead we end up sympathizing with only to have that particular rug pulled out from underneath us (a la PSYCHO), and a certain degree of wtf! sleaze. And Angie Dickinson is a true revelation in the film – her wordless sequence in an art museum is a stroke of brilliance. 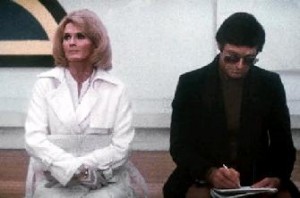 I could not help but thoroughly enjoy these films when I saw them. I think they are instant classics & if you have yet to see either of them I highly recommend it. You should take some time for yourself & make sure to catch one or both of them as soon as possible. I have seen a lot of movies in my time & there are not many that can keep up with these two when it comes right down to it.

There are several more movies which I am also a huge fan. I will take some time to go over some of them with you on this site. I am not a professional movie critic but I can say that I do have a particular taste for films. I can sniff out a good one even if it flies below the radar & it seems like everywhere I look there is a bad one…